I want a device that connects to an individual appliance and shows me how many kilowatts the appliance is drawing. I bought one from Amazon but it was difficult to understand and wasn’t reliable. Can anyone recommend one that is simple to use and one that gives a simple and accurate display?

Each appliance should show the amount of watts per hour it uses. Once you know that, it’s simple to work out the cost per hour. Google has loads of example calculations. There’s no need to buy a gizmo from Amazon.

hi Anton, thanks for replying. I understand what you mean but what I would like is to know how much electric an appliance has been used during a 24 hour period, rather than its maximum rating because some appliances have built in sensors, like thermostats, and will switch off at times, and other appliances may be switched on and off such as the kettle. I have an electric car and I would like to know how much charge it has taken each day. With thanks.

I have used these a few years back, I only used for a few weeks to get a feel for whatused how much.
It does cost and KwH.

Simple app, or can delve deeper with scripts etc…

I use these appliance monitors and hub from these chaps

You can then see how much a device like a fridge freezer is costing.

You can get them from Amazon and of course for a fridge only get the monitoring module and no one that can switch the load off and on.

Thanks so much everyone for your help. The EBay device seems the cheapest. Was it easy to use and understand?
I’ll also look into the Mihome device. I couldn’t see prices on their website but I will contact them.

scudo September 25, 2019, 11:40pm #8
Was it easy to use and understand?
It came with a set of instruction on how to set the kWH rate and from memory a couple of other things, the downside for me was it only monitored when `plugged` in so you had to set it at that point which was ok for most devices but the washing machine had an awkwardly placed socket. I would imagine they have been updated by now as mine would be around 7 years ago now.

I only used it for a couple of weeks then got fed up monitoring stuff, probably a bit like the smart meters ok as a new toy for a couple of weeks then most people ignore them. I did make me aware as to what costs were but most were things I couldnt control like fridge/freezer etc, I made better savings by just switching things of when not being used and changing to LED lights. I also now use cheap timers so nothing is on standby overnight.

This one’s not cheap, but I’ve found it to be good quality and reliable: 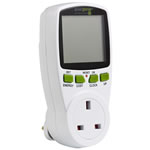 Energy Saving Power Meter - ENER007 - Using energy monitoring devices is a great way to save money on your electricity bills each month. Simply plug it into a powered mains socket and then plug your appliance into it.